Ranch residents expect to see our dumpsters packed full by holiday visitors, but seeing several dumpsters topped off with tree and brush clippings today means that some of us need to reread Carol's article.

Every once in a while, I open the dumpster lid to dispose of my trash, and I’m looking at a dumpster full of…..pine needles and dead twigs and pine cones and weeds. Ah, it appears that the Ranch has new people and they're trying to adjust from city living to mountain living.

Living in the city, people are trained, even threatened with fines, to keep their property cleaned up. Rake those leaves, pull those weeds, prune those trees, cut that grass and put it all out on the curb for the trash pickup. Good job!  Good riddance!

Now that we’ve come to live in the mountains amidst nature, acres and acres of nature, what are we supposed to do with all this refuse that we’ve spent hours and days and weeks cleaning up?

We all try to keep our places neat and orderly. We are aware that there is a fire hazard when pine needles accumulate around dwellings. We keep our trees pruned up for the same reasons. Same goes for weeds and grass.  It’s a lot of work and it looks great! But, what do I do with all of the debris once I’ve finished?

Excellent question! Glad you asked! So I am going to tell you how I do it. I rake and weed and prune and mow and it really piles up. When I moved onto the Ranch 27 years ago, the first thing I did was to find a place where I could dump my pine needles, but not just anywhere. It needed to be somewhere that wouldn't just become another big messy eye sore.

I looked around, and I spotted a swale or drainage channel on the slope behind my house. It was perhaps three feet deep and seventy-five feet long. Each time it rained, water flowed down this channel and eroded it deeper, carrying away soil that should have been supporting growing things. I began dumping my pine needles there, and over the years, the channel has filled up with decomposing needles. Now the slope is fairly even in back of my house, and the decomposing pine needles have turned into soil. This is also a good place to dispose of all those cow pies dotting the clearing around the house after the cows leave after hanging around all summer.

I have done a lot of mitigation, pruning dead branches, tree removal, limbing up. For the small stuff, dead twigs and pine cones, a very steep slope to the north of my house has now become a gentle slope due to dumping small twigs, pine cones, and cow pies. I layer them with pine needles, and they decompose, turning into soil. North slopes are safer than south slopes for this purpose as hot summer winds blow from the south. That’s where a wild fire will most likely come from, and you want those south facing slopes to be as clean of large debris as possible so as not to feed a fire that could climb into the trees.

When I mitigate and thin out standing trees, the branches up to two inches in diameter, get carefully piled in long rows in a clearing. Larger stuff is cut up into stove wood and heats my house. When I have filled the clearing I call RC Ghormley or T-Rox to come and mulch the piles for a very reasonable fee. I used to own a chipper, but a mulching machine can do in one hour what it used to take me all summer to chip myself.

In summer, I do a lot of weeding to encourage the natural plants and grasses that wildlife feed on and to discourage invasive species and opportunistic weeds that take over open areas after mitigation. The only weed I dispose of in the dumpsters is thistle because thistle down will fly away on the wind and do its evil someplace else unless it is carefully bagged and disposed of.

Weeds decompose more quickly than anything else. Weeds (other than thistle) can be spread underneath the  trees where sunlight is minimal. For example, I try to keep mullein controlled by pulling it wherever I see it. It has seed heads resembling candle sticks and thousands of seeds in each stalk. Mullein is not good browse for wildlife and it will take over if not kept under control, crowding out more desirable plants and wild flowers. Mullein weeds are very bulky. Along with other weeds, it can be spread under trees where the sun shines maybe for an hour at the end of each day. The seeds will never germinate in the shade, and in just one year, these bulky weeds have decomposed and all but disappeared as if by magic. As a bonus, they are conditioning the soil and making the trees healthier.

That is how we mountain folk dispose of our yard refuse. It’s easy. It’s natural. It helps to curb erosion by filling in washed out areas. It returns nutrients back into the soil. The forest is happier for it, you will be happy, and so will your neighbors who will be able to fit their trash in the dumpsters. 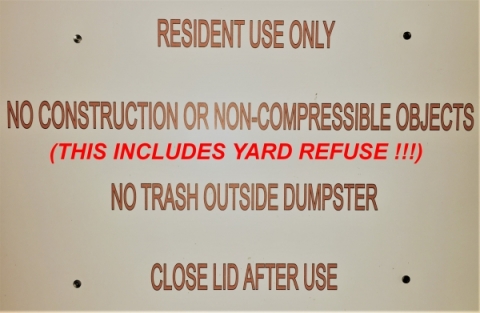 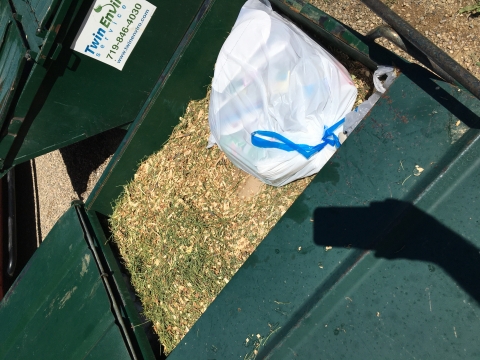