PROFILES IN RANCH HISTORY - Thank you is not enough!

As the Communications Committee began work on the new website in 2019, we asked Carol Rawle if, after a 20 year hiatus, she would consider writing another episode of her Profile in Ranch History series, this time focusing on our retiring webmaster, Pat Roehl. Carol readily agreed and also recruited former SFTR resident Joyce Wolff, the Wolffs being long-time friends with Pat and Nancy Roehl.

Picture this. You’re a new board member and you pipe up at your first board meeting with, “We need a communications committee”, and all the other board members stare at you blankly and say, “Why?”

Then after the new committee was approved you become involved in trying to establish a web site, and you don’t even own a computer, let alone even know how to use one.

I had a neighbor at the time, Morgan Chai, who knew her way around a computer and I asked her to try to design a rudimentary web site. She gave me a floppy disc, as data storage files were called back in those dinosaur days, and I took it to a young man named Ronny Martin who ran the only internet dial-up service in town out of a closet in a bike shop at Topar’s on east Main.

He shut down the service while we tinkered with the floppy disc seeing if he could make it work. I kept thinking about all those poor folks on their computers waiting for their connection to come back on. Good times back in the Wild West.

But things hit a wall. At the annual meeting in 2000, I had to stand up and give the annual Communications Committee report to the property owners in which I had to admit failure. I stated point-blank that unless someone materialized out of nowhere to help in the endeavor, there probably wouldn’t be any way to get a web site going, let alone keep the Communications Committee going.

That’s when a meek voice from the audience, said, “I’ll help”. I swear, as I looked in the direction of that voice, I saw a halo of golden light surrounding a young man with a cherubic smile.

Thank you, Pat, for your significant and priceless contribution to the Santa Fe Trail Ranch.

With a gentle, “I’ll do it.” from the quiet young man in the third row of the Massari Auditorium and an astonished, “REALLY!” from Communications Committee (CC) Chairwoman, Carol Rawle, the Santa Fe Trail Ranch Website was born. At the Annual meeting in 2000 Carol described the increasing need for better communication among the POA Board, residents, and non-resident property owners from around the country. In those nascent years there were few resident property owners. The Women’s Group sponsored The Bare Facts*, the chatty casual non-business newsletter that went out only four times a year and did not serve as a vehicle for daily interaction with the Board and other property owners. That big problem was solved with those three little words when Pat Roehl, volunteered to take on the monumental task of designing, executing and overseeing the excellent SFTR Website, a job he carried out faithfully and professionally from his homes in Florida and New Hampshire for the next 20 years.

The Website quickly became the focus of Ranch life. He taught non-technical members to navigate and contribute to the user-friendly Website. “Let’s ask Pat.” was a phrase frequently heard when people had ideas they wanted to share and needed to know how to proceed. With a firm and steady hand, he maneuvered the minefield of the Forum when entries were tasteless and inappropriate.

As for the Roehl-Wolff life-long friendship, it began in a somewhat similar fashion. We didn’t know Pat at all and had never met other than passing hellos at the annual meetings. So, with post-meeting introductions now official, plans were made for Pat to return to the Ranch for a tutorial for the CC. Walt invited him to stay with us and he accepted. I remember when he arrived at Loma Lobo, suitcase in hand, I answered the door and thought, “Well, here he is.”

Walt made him martinis and they soon were fast friends. Happily, for us he stayed with us many times through the ensuing years, bringing Nancy on a couple of occasions. I think once we were snowed in. We visited them in Florida where he toured us around Tampa Bay in his sleek boat. He spent a couple of days with us here in New Mexico and came from Florida to say goodbye to Walt at Walt’s Celebration of Life in Trinidad in 2017. He has the best taste in email funnies and keeps me laughing to this day.

Although Nancy and Pat sold both Roehl properties, he was willing to carry on as Webmaster.

Pat has always been underappreciated. The occasional “Thank you, Pat.” is not enough. So, with the end of this era I urge you to let him know that as one of those truly critical in the history of “the Ranch” he has been invaluable. I offer my heartfelt and loving thanks and hope he knows how much I have enjoyed working with him on this project. Although the original website that Pat created has recently been redesigned with his help, he will never be lost to me and I know Walt is echoing these sentiments wherever he may be.

(*Earlier this year Michael Hughes worked with Pat to add all 18 issues of The Bare Facts to the SFTR website. They can be accessed under Articles in the History category.)

Meet Pat Roehl, the creator of the Ranch web site. Here is his account of how he and his wife Nancy happened to become property owners on the Santa Fe Trail Ranch so long ago, and how he came to develop the web site the Ranch so desperately needed.

How did you and Nancy happen to decide to buy property on the Ranch?

Small western towns always fascinated me.  My wife, Nancy, and I started casually looking into property along the Rocky Mountains – from Idaho down to New Mexico.  We only actually visited two areas – both in Colorado.  Trinidad seemed like a great place to buy some land and start thinking about a vacation home.  Trinidad had a nice balance of weather, a charming downtown, and the Ranch has fantastic views!

At that time I traveled nearly every week for my consulting assignments and was able to visit Trinidad a few times a year, which was always interesting.  Building that second home in Colorado wasn’t in the cards, but I was able to make some fun improvements to my lot.  Visits ran the extremes of weather from -20 to 100 degrees!

What is your work background that relates to designing the website?

I’m in the computer software business but didn’t know anything about creating or managing a web site when I took over SantaFeTrailRanch.com in October 2000.  I had been wondering if I could get involved, as it was frustrating to look at the original static web site and rarely see any changes.  As a property owner since 1992 or 1993 but living in Florida, I wanted to know more about what was happening at the Ranch.  Managing the web site seemed like a good fit.

What made you decide to volunteer at that 2000 annual POA meeting?

At the POA Annual meeting in 2000, Carol Rawle made a passionate (and nakedly desperate) plea for someone to take over the site as the original guy wanted to move on.  When I volunteered, I think Carol pinched herself, as she clearly didn’t anticipate any takers.

My background in corporate computing, using IBM mainframes for large companies such as insurance, banking, aerospace, manufacturing, and pharmaceutical, helped a little for the task – but not a lot.  The original creator, also a property owner, gave me some pointers and suffered through my questions enough to get me going.  With my background in database technology (having worked for a mainframe database vendor), I was determined to have a somewhat dynamic web site where content could be password protected but still provide lots of unprotected information.  Logins allowed a discussion forum and keeping our meeting minutes and financial matters private.  Over the years the web site grew in size, features, and complexity but there were only small outages and no data was ever lost.  I’m proud that most property owners found the web site helpful and were so appreciative of my efforts.

How did the Ranch come to lose you as a property owner?

Nancy and I bought a summer home in New Hampshire to escape the Florida heat – even though that is some of the best boating weather.  We chose that area because it was near where Nancy grew up and we had friends established there.  As we became busier and busier, I wasn’t able to visit the Santa Fe Trail Ranch very often.  Reluctantly, we decided to sell.  We now split our time between Florida and New Hampshire.  My job is mostly the same as it was, but since the 9/11 terrorist attacks, travel is no longer expected as it once was.

Nancy and I met very interesting and fun people during our visits – friends we may not get to see again, but we’ll treasure memories of those visits.

We will miss you, Pat, but you will never be forgotten. 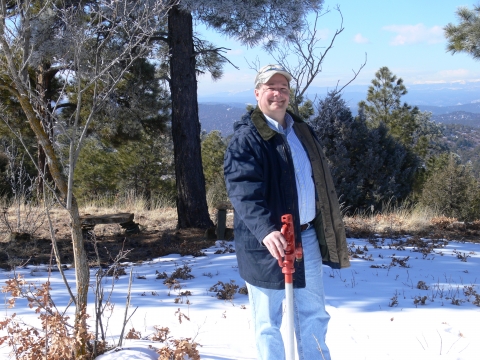